RODEGHIERO PAINTS is an important stud farm where registered American Paint Horses are bred.
The farm is at Mure, a small town near Molvena, a village in the hills near Vicenza, in the north of Italy.The stables are in one of the most beautiful places in the foothills of the Dolomites in the Veneto: at the foot of the Asiago Plateau and not far from picturesque towns of both historical and artistic interest, such as Marostica, Bassano del Grappa and Asolo.

The functional and practical working stables are run by the Rodeghiero family: Alberto, Claudia and their children, Eva, Lia, Zeno and Dario.

The farm was founded by Alberto Rodeghiero in 1981 and he has been managing them ever since.
Alberto comes from a family with a long tradition of interest in horses and in equestrianism. His father, Dario, was a well known horse trader who passed his passion for horses on to his children: Gianfranco continued his father’s work, but Alberto decided to enter the field of horse breeding. After having finished his degree in the Science of Animal Breeding, at the University of Bologna, Alberto, who had always loved Paint Horses, spent a long period in the US working in Paint Horse stud farm. He then returned to Italy, bringing his new skills, and some registered horses, with him. 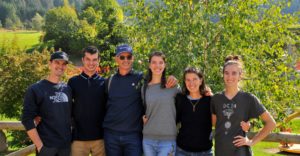 Over the years the stables have grown and now there are more than 60 horses. The horses are schooled and cared for by Alberto himself who because of his love and commitment to their well being, manages to obtain excellent performances from his animals at shows. Alberto has been a consultant for the Paint Horse Club Association in Italy for a long time and has made an important contribution to establishing Paint Horses in Italy. The main activity of the farm is breeding, raising, selecting and schooling Paint Horses. All the procedures used have been developed so as to obtain the best possible results and, at the same time, to ensure optimum conditions for the horses themselves. There are 30 stalls, some of which are used for livery, and there are also large boxes for birthing, showers, protected pastures outside for brood mares and foals, schooling ring, schooling jumps and, a splendid, recently built covered arena. The farm also have modern equipment for scans and gynaecological assistance to brood mares and for obtaining, preparing and sending out semen. Currently, the following Paint stallions are available at our stud farm MR SONNY IMPRINT and FOREVER A GENTLEMAN.

We use cookies to ensure that we give you the best experience on our website. If you continue to use this site we will assume that you are happy with it.OkRead more